Michelle Yeoh in Everything Everywhere All at Once.

There is little that hasn’t already been said about Daniel Kwan and Daniel Scheinert’s Everything Everywhere All at Once. The movie shows big studios how to do justice to the concept of multiverse, and yet it feels wrong to call it just a multiverse movie. It is so much more!

Directors Kwan and Scheinert take a concept that has largely been used to exploit nostalgia, and tell a deeply human story with it. Behind the ingenious action and stunning visuals, there is a very real mother-daughter relationship augmented by surrealism. There is also a refreshing take on nihilism — one that seeks hope in hopelessness. The film is a reflection of the best and worst of humanity, and ‘verse jumping’ is just a tool that shows us how we all balance this duality. Between all this, there is a celebration of the strength in letting go and the faith in holding on.

Not your average multiverse movie

But how is it so different from the films produced by Marvel and DC? For starters, the concept of parallel universes becomes an umbrella for several themes in Everything Everywhere All at Once.

The branching realities explore the haunting heartbreak of living in could-have-beens. The hollowness that Evelyn (Michelle Yeoh) finds in her life is painfully contrasted with alternate versions of her that took different paths. At the same time, every version of her has something she wants, but also lacks something that she has. This is juxtaposed with the dissonance between immigrant dreams and reality, which often boils into parent-child relationships. Evelyn’s reality is a product of being swept away by the lure of an unknown land, which rarely gives what it promises.

Apart from the hotdog fingers universe, every single universe shows her remaining in China and becoming versions of herself that immigrant Evelyn is envious of. The creation of Jobu Tupaki (Stephanie Hsu) is also her doing, spurned by a disgust for how her own life turned out and propelled by the desire to push her daughter too far. Evelyn’s daughter Joy’s Asian-American identity is evident when she appears as Tupaki. The impact of two distinct cultures becomes too much for her to balance. 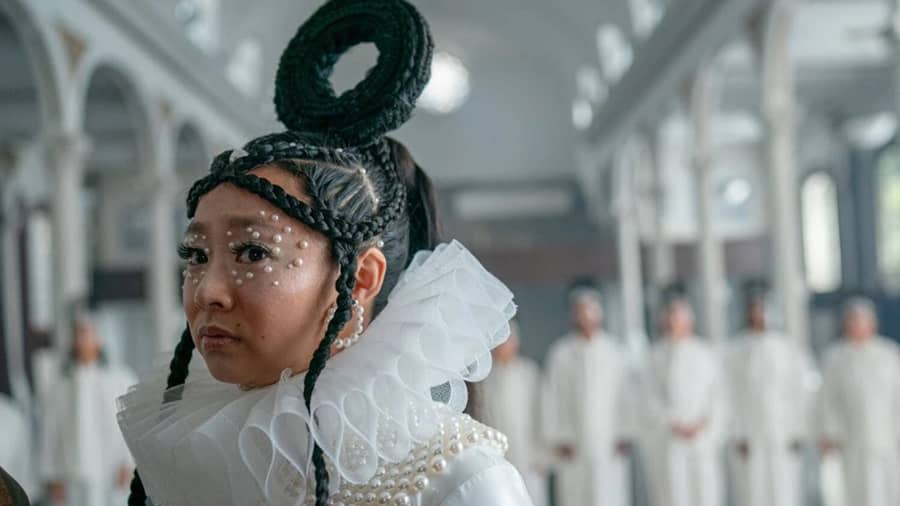 Nihilism and a unique take on yin and yang

The concept of an ‘Everything Bagel’ feels like the most meaningful metaphor and the most meaningless joke at the same time. It embodies the black hole that sucks in everything, taking us to the conclusion that it all adds up to, well, nothing. The makers literally serve nihilism on a plate, showing us how miniscule our existence is in the grander scheme of things. At the same time, the film encourages us to draw strength from the pointlessness of our existence and take action. It’s a unique take on yin and yang.

An ode to cinema

The multiverse is also a love letter by the makers to cinema itself. While the dimension with sausage fingers is an undeniable nod to Stanley Kubrick’s 2001: A Space Odyssey, the scenes from Eveyln’s martial arts universe bear a close resemblance to Wong Kar-wai’s cinema, particularly In the Mood for Love. In fact, the latter is also a reference to actress Michelle Yeoh’s actual career, with footage from her red-carpet appearances being used.

Going beyond CGI and star power

The numbers further amplify this as a filmmaking achievement. Everything Everywhere All at Once was made at a budget of $25 million. Compare that with the biggest multiverse films of recent times — Doctor Strange in the Multiverse of Madness and Spider-Man: No Way Home, both of which cost $200 million. It’s reassuring to know that beyond CGI and star power, human beings are still moved most by powerful stories. Go experience this story in the theatres while you can.

‘Avatar: Way of the Water’ won’t release in Kerala, India because…