Bengaluru: Pedha is one of Karnataka’s most loved sweets and it is synonymous with the city of Dharwad. This little milky-sugary treat is the biggest export of this cultured south Indian educational hub.

In Karnataka, pedha doesn’t need an introduction, nor does it need an occasion to relish. Having a peda is kind of a ritual for the people in this state, not just during special occasions and festivities, but any time!

But, how did this simple milk-sugar concoction become such a sensation? How did pedha come to associate with Dharwad and who came up with this sweet legacy? Let’s dive in…

Pedha has a history of more than 175 years and it is still sold from the same place in Dharwad where it was first made by an old migrant confectioner, Ramratan Singh Thakur.

Now, a popular dessert across the country, there was a time when pedha was only sold for a couple of hours daily from a small shop at Dharwad’s Line Bazaar.

Towards the late 19th century when Ramratan’s grandson, Babu Singh, took over the confectionary, people of Dharwad had become so enamoured by the little brown sweetmeat that they didn’t mind standing in long lines for hours to get their share of the sweet.

The taste and aura of Thakur’s Dharwad Pedha are unmistakable, winning the sweetmeat several awards and the Geographical Indication Tag from the Government of India.
Image Credit: Shafaat Shahbandari

So much so, that the street on which the Thakur family set up their first shop came to be officially known as Line Bazaar!

This is when it became a local brand and it is still known as Babu Singh Thakur’s Peda.

“The demand was so high that people would queue up long before the shop opened. The line of people eagerly waiting to buy the pedha would snake down long way back along the street and this is how this street got the name Line Bazaar,” said Durga Singh Thakur, the current owner of the legendary confectionary Babu Singh Thakur’s Pedha.

Though, the confectioner is now a global brand, exporting pedhas across the world, and with several franchises in the town and across India, loyal customers still love to buy from the original Line Bazaar shop.

“A visit to Line Bazaar has become almost mandatory for everyone travelling through Dharwad, while for the locals it’s part of their routine. We have several franchises now, but people still love to visit the original shop. It is the trust and legacy built by our forefathers and we are proud of the heritage we carry,” added the Thakur, the fifth generation descendant of Ramratan Singh.

Though, the Dharwad Pedha now has several clones and is made by other confectioners as well, but the taste and aura of Thakur’s Pedha are unmistakable, winning the dessert the Geographical Indication Tag from the Government of India, reserved only for original products of a region.

The Thakurs, who originally hail from Unnao, a town near Uttar Pradesh capital Lucknow, have also won several awards, some received during the British era around 100 years back. 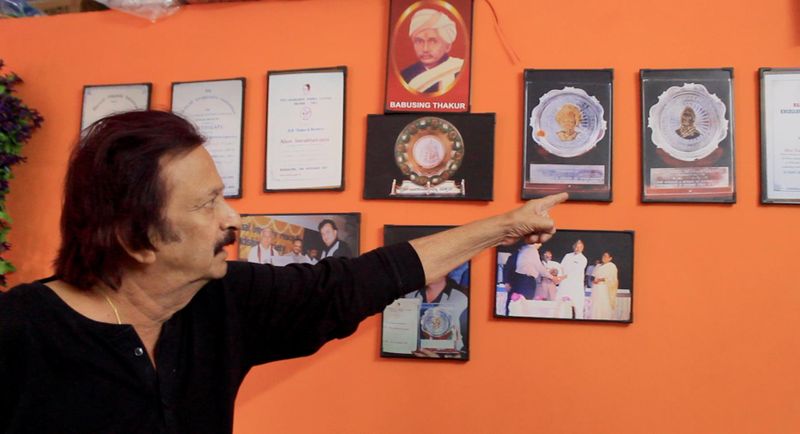 Durga Singh is the fifth generation descendant of Ramratan Singh, the confectioner who originally made the pedha 175 years ago.
Image Credit: Shafaat Shahbandari

According to the family history, Thakur Ramratan Singh hailed from a family of confectioners and he set out from his native Unnao in search of greener pastures during the early 1850s.

When he arrived in Dharwad, the city was not more than a small village being developed by the colonial rulers.

The little town has now expanded into a sprawling city, while still retaining its old world charm, just like the pedha.

However, even after nearly two centuries of co-existence, it is still not clear whether Dharwad is more famous or the Pedha!

Nevertheless, when Ramratan Singh first fumbled with his little sweet concoction, little did he know that his overcooked, thickened and evaporated milk balls, sprinkled with some powdered sugar would someday bring international fame to his family.

Until recently, the pedha was handmade at home by all the Thakur family members. Though still handmade, it is now made in factories.
Image Credit: Shafaat Shahbandari

Whether the grand old Thakur was aware of his history making tendencies or not, his descendants Durga Singh and family are milking it big!

Until recently, the pedha was handmade at home by all the Thakur family members. They were made fresh every morning and were sold out within a couple of hours to the waiting crowd.

Now, the confectionary has evolved into a multi-million dollar business that also produces a wide range of sweets and savouries apart from pedha.

“All our ancestors have taken great pains to develop this business and we are conscious of the legacy we have inherited. We are doing our best to keep up with the growing demand while ensuring that the quality doesn’t get diluted,” added Durga Singh, who now operates a state-of-the-art factory that also produces 3,000 loaves of bread and an equal number of buns daily.

Made only from two ingredients – milk and sugar – there is no secret ingredient that goes in the making of the pedha. However, the secret lies in the proportions and the process. 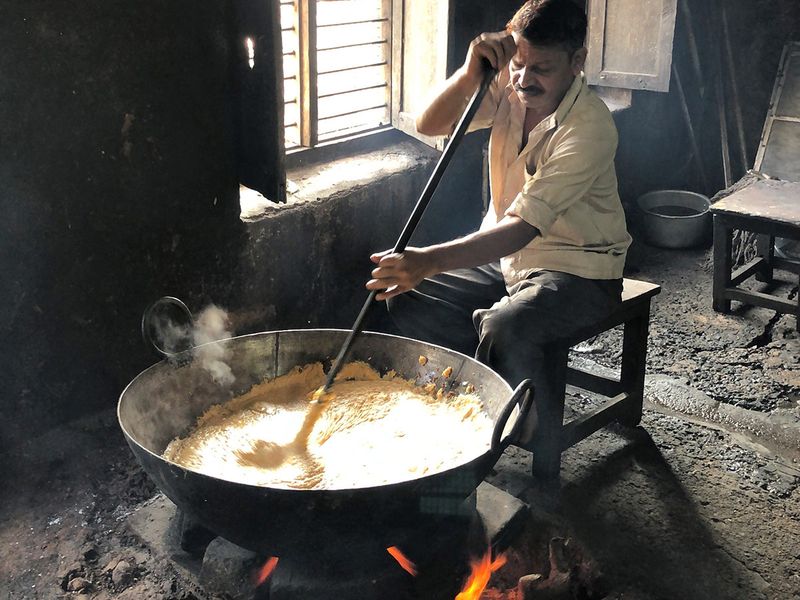 Keeping the legacy simmering – made only with milk and sugar, the secret of pedha lies in hours of stirring.
Image Credit: Shafaat Shahbandari

Milk is constantly stirred for nearly three hours in a huge, simmering cauldron, turning into a creamy, pasty substance, which is called Khova.

Sugar is added to Khova and stirred again for some more time, until the substance is thoroughly fried and gains a golden brown colour and a doughy consistency.

The resultant substance is a giant pedha, which is moved into large trays and is allowed to cool. Once it loses heat, the dough is turned into big balls and rubbed in powdered sugar. The big balls are then made into smaller balls and thrown again into powdered sugar, for the last round of sweetening, before they are packed into boxes and transported to the shops.

“The only secret to our success is the love and passion with which we make our products and serve our customers, we are glad that we get the same love back,” added the beaming Thakur.

This no doubt, is one of India’s sweetest success stories. Looking at the history and growing popularity of Dharwad Pedha, it’s obvious that the Thakur family will continue to spread more sweetness in the society!

India is going to be the world’s next growth engine, IBPC organized a panel…

India’s hiring activity back to pre-festive levels, grows 27 per cent in November