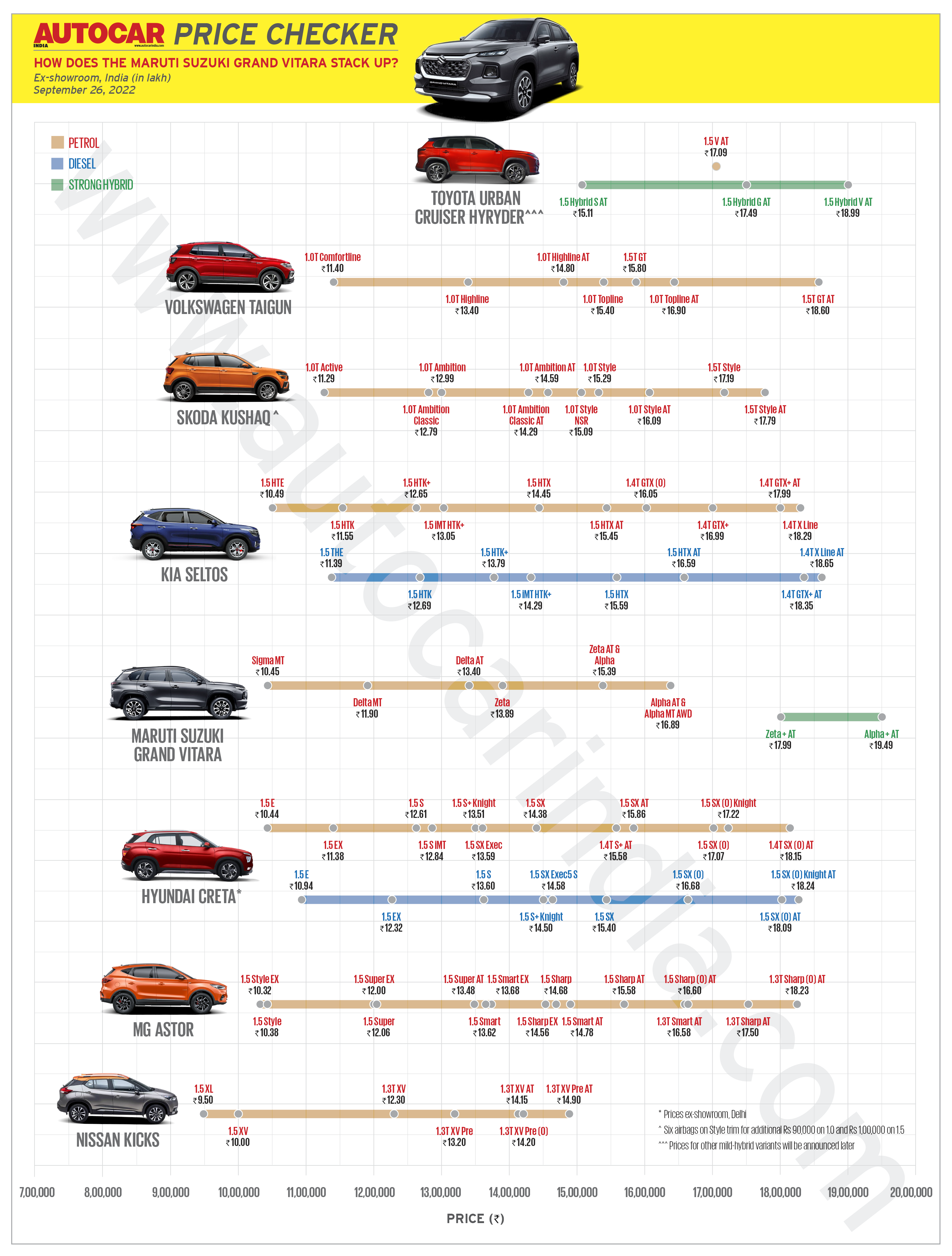 With the prices of the Grand Vitara out, we see how it fares against its competition.

Maruti Suzuki has just announced the prices for all variants of the Grand Vitara, while prices for its cousin from Toyota, the Urban Cruiser Hyryder, were revealed on September 9. The two midsize hybrid SUVs are quite similar to each other, yet have differentiating factors.

The prices for the Grand Vitara range from Rs 10.45 lakh to Rs 19.49 lakh. On the other hand, Toyota only announced the prices of the strong-hybrid variants and the mild-hybrid V AT variant, which fall in the range of Rs 15.11 lakh to Rs 18.99 lakh.

The segment can be divided into two parts on the basis of the powertrain – mild-hybrid with entry-level petrol engines and strong-hybrid with higher-level petrol and diesel engines – with the categorisation based on the power they develop, their fuel efficiency and their price.

In the lower half of the segment, we can compare the mild-hybrid powertrain with the naturally aspirated ones of the Hyundai Creta, Kia Seltos, Nissan Kicks and MG Astor, as well as the 1.0-litre TSI petrol engines of the Skoda Kushaq and Volkswagen Taigun. Similarly, in the upper half of the segment, the strong-hybrid powertrains are comparable to the turbo-petrol and diesel powertrains.

The cheapest of the lot, by far, is the Nissan Kicks, with the price of its entry-level variant starting at Rs 9.50 lakh – the only one to have a sub-Rs 10 lakh starting price. The second most affordable car in the range is the MG Astor, which has a starting price of Rs 10.32 lakh.

However, it cannot be definitively said which car will have the most expensive starting price, since the Toyota Hyryder is the only one which hasn’t had some of its variant prices announced. However, going by the difference of Rs 20,000 between the top automatic variants of the two mild-hybrid SUVs, the Hyryder may have a higher starting price of the two.

A point to note is that Kia and Hyundai also offer diesel powertrains on their SUVs. Since diesels and strong-hybrids are not directly comparable, we are considering them solely based on their fuel efficiency. Maruti Suzuki and Toyota claim that the strong-hybrid variants of their respective models have a fuel efficiency figure of 27.97kpl, which is more than the claimed fuel efficiency of the Seltos and Creta.

Despite the prices of the Grand Vitara just being announced, the hybrid SUV has already amassed over 50,000 bookings.

*All prices are ex-showroom, Delhi

Which midsize SUV will you select? Let us know in the comments below.

Trending news: Hero-Harley bike will be seen running in India, both companies will…

Anxiety on the range: High-range EVs with long-duration batteries on demand