Movie Review: “Pearl” is a creative and most unexpected addition to the XEU – The Independent | News Events Opinion More

Just earlier this year, Ti West (the horror maestro behind “House of the Devil,” “The Innkeepers,” and “The Sacrament”) took the independent genre world by storm with “X,” a sexually-charged slice of 70s-set slasher horror that served as a sort of high-energy fusion of “Texas Chainsaw Massacre” and “Boogie Nights.” Now, West is back with a most unexpected follow-up in the form of the 50s-set “Pearl.” Before getting to the review, it should be noted that while “X” and “Pearl” are connected, they both work as stand-alone films.

In “Pearl,” Mia Goth is the title character, a young woman emotionally trapped in an isolated farmhouse by a domineering mother and a deathly-ill father. As she waits for her husband to return home from the war, Pearl continues to dream of becoming a star. A nearly unobtainable dream, particularly given her circumstances. As this woman continues to deal with a somewhat volatile home life, it soon becomes abundantly clear that an eccentric and slightly unhinged Pearl may have a bit of a screw loose. 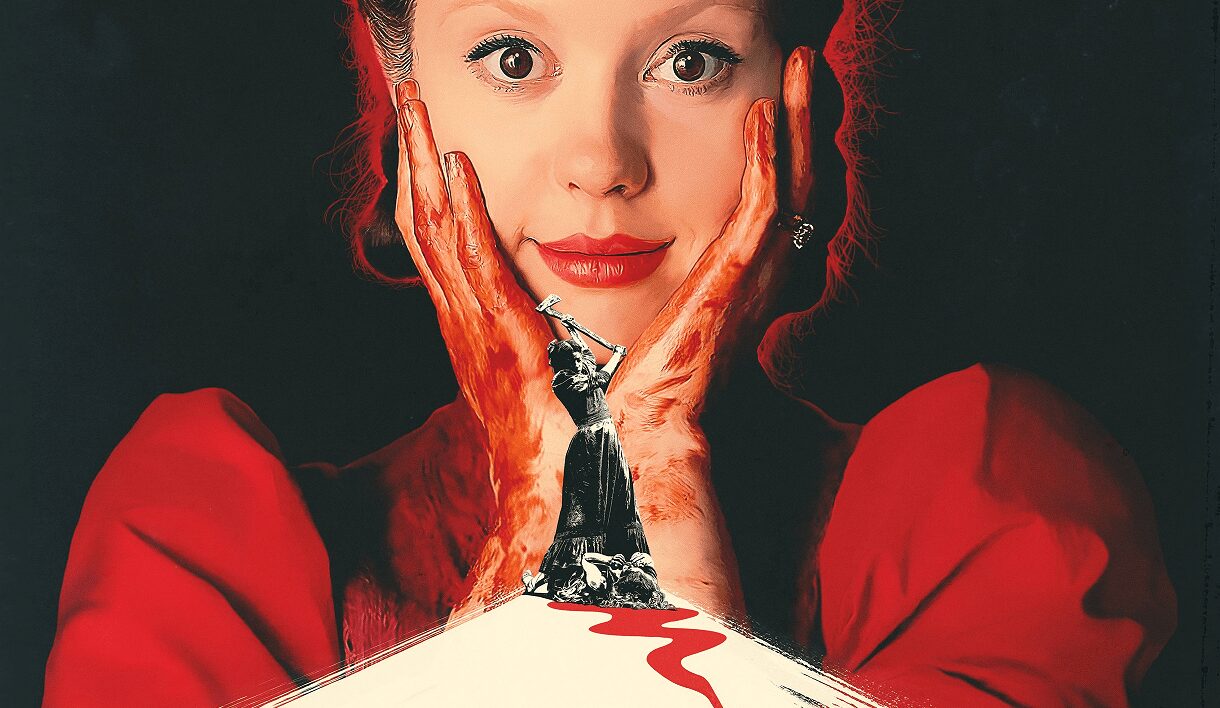 “Pearl” is winking at technicolor classics of yesteryear as well as the best in 50s melodrama.

Whereas “X” was clearly paying homage to 70s and 80s horror set to an adult film backdrop (with a splash of M. Night Shyamalan’s “The Visit” thrown in for good measure), “Pearl” is winking at technicolor classics of yesteryear as well as the best in 50s melodrama. There are also shades of “Whatever Happened to Baby Jane,” “The Bad Seed,” and “Psycho.”  There’s even a dash of “The Wizard of Oz” thrown in here, although it should be noted that you’ve never seen the scarecrow from that beloved 30s classic in the same sort of compromising position you see him in here.

Carrying this most unexpected gem of a slow-build horror show on her more-than-capable shoulders is the gifted Mia Goth, who not only stars in “Pearl” but also worked on the screenplay with West. While she proved to be a lot of tenacious, spunky, and charismatic fun in “X,” she’s next level here. Look no further than her much-buzzed-about extended 9-minute monologue in the final act. While there are shocking bursts of violence, weirdness, sadness, and a true sense of dread that often permeate this movie, it’s always a psychological exploration into Pearl first and foremost, and that makes the prerequisite bloodletting feel all the more effective. And Goth is the central reason this movie works as well as it does.

It should also be noted that “Pearl” makes “X” a richer (and, to a certain extent, sadder) experience. Clearly, these movies deal with themes of sex, violence, and repression, but there’s an ample amount of complexity to West’s world-building here that takes it above the sort of exploitative levels of horror you might be expecting. Mostly, though, West and Goth are simply a match made in horror heaven. A storyteller and his muse firing on all cylinders, and we, the horror fans, are all the luckier for it.

This is an incredibly creative and altogether surprising prequel to West’s last offering, and it serves as a perfect addition to the X Extended Universe, a universe that will also see a third chapter entitled “MaXXXine.” There’s no telling where that mid-80s set movie will rank amongst the trilogy, but if it’s even half as solid as “X” and “Pearl,” then horror fans have much to celebrate.

Viewpoints and perspectives expressed throughout The Independent are those of the individual contributors. They do not necessarily reflect those held by the staff of The Independent or our advertising sponsors. Your comments, rebuttals, and contributions are welcome in accordance with our Terms of Service. Please be respectful and abide by our Community Rules. If you have privacy concerns you can view our Privacy Policy here. Thank you!

Click here to submit an article, guest opinion piece, or a Letter to the Editor

Advertise with The Independent of Southern Utah, we’re celebrating 25 years in print!