Just before the country enters the last week of monsoon 2022, rains drenched most parts of North India in the past week.

Record-breaking rains in many parts of Haryana

Narnaul in Mahendragarh district recorded 196.0mm rainfall ending 8:30 am on 25 September. It is the highest ever single rainfall recorded during the month of September breaking the previous record of 165.0mm on 28 September 1996.

Till 8:30AM on Sunday morning Rohtak recorded 165mm rainfall in the span of just 9 hours breaking its single day highest ever September rainfall record of 158.9mm from 11th September, 2009.

Also city observed 309mm rainfall in the last 3 days this is the highest rains in the month of September after 1995 when it experienced 540mm of rains in the span of total 6 days leading to major flood outbreak, considering the 3 days rain accumulation flash flood like conditions have been observed especially in the last 36 hours when the rain intensity was on peak.

Bhuna in Fatehabad district experienced 377 mm rainfall in the span of the last 24 hours. Almost the annual rains of the station have occurred in a single day.

Rainfall in some other stations of the district:

Various parts of Gurgaon were also submerged amid incessant heavy rains. The millennium city experienced 242mm rainfall in the past three days – the second highest September rains in the last decade.

Massive rainfall in a short time also damaged standing Kharif crops in the state. Bajra and rice are majorly affected as fields are submerged in water.

Delhi’s base observatory Safdarjung observed 18.6mm rainfall in the past 24 hours ending 8:30am on 25 September, the monthly total having reached 164.5mm against the normal of 118.2mm the departure from normal stands at +39 per cent for the month.

Amid good rain in the capital the seasonal rainfall at Safdarjung crossed 500mm rainfall mark at 516.9mm since 1 June, still, a shortfall of -19 per cent is there as normally it records 635.1mm rains in this period.

Rainfall in the last 24 hours ending 8:30 am on 25 September remained highly above normal and restricted to northern states of the country

The credits for outstanding rains at the end of the season goes to the low-pressure area travelling from the Bay of Bengal across Central India reached North india towards the end of the week and became stationary around West Uttar Pradesh and Adjoining south Haryana for 3 days in a row just before re curving towards Uttarakhand due to upcoming Western Disturbance trough.

Over the past week weather conditions were largely dry across South India in absence of any major weather system, Central and eastern parts of the country received near normal rains.

• Since 1st June India as a whole recorded a total of 909.3mm rainfall against the average of 848.5mm, a departure from normal stands at +7%, departure continue to stay similar to last Saturday’s number of +7% as rains were balanced across the country as North received larger chunk in the week. 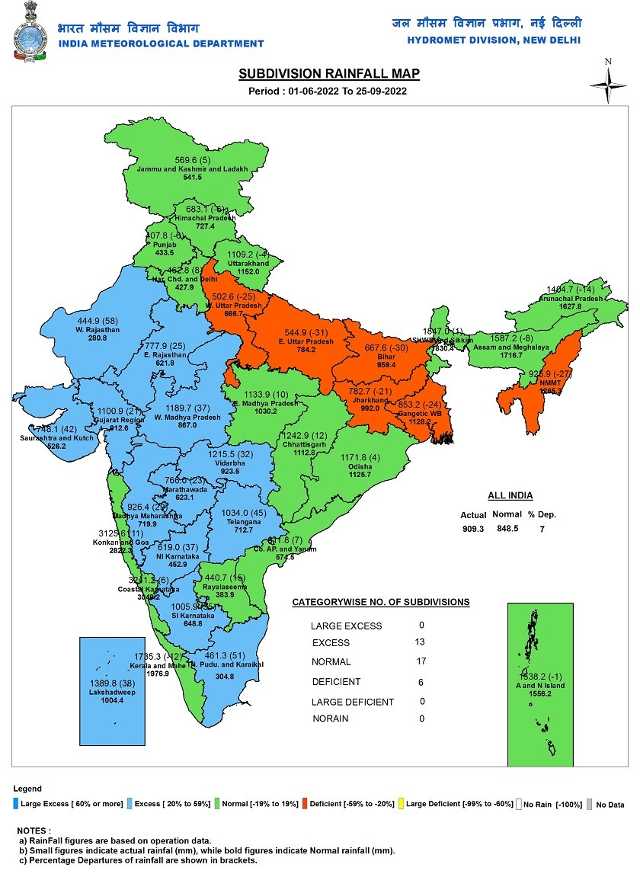 Current synoptic features weather in India as on 25 September:

• The withdrawal line of Southwest Monsoon continues to pass through Khajuwala, Bikaner, Jodhpur and Naliya.

• The Western Disturbance is a trough in mid-tropospheric westerlies with its axis at 5.8 km above mean sea level roughly along Long. 70°E to the north of Lat. 27°N persists.

• The north-south trough on Long. 87°E to the north of Lat. 20°N extending upto 3.1 km above mean sea level has become less marked.

The prolonged spell of heavy rains in north India is coming to an end as the low pressure area weakens and is expected to fade away by Sunday night.

Dry North West winds appear over the states Monday onwards as a result dry weather conditions are expected to prevail across Jammu, Kashmir, Ladakh, Himachal Pradesh, Uttarakhand, Punjab, Haryana, Delhi NCR, Uttar Pradesh and Rajasthan across the upcoming week. Moisture content will start decreasing and nights will become pleasant with minimum temperatures in the range of 22 to 25°C while sunny weather will ensure day temperatures will rise by 4-5°C leading to slightly warmer afternoons.

The stalled monsoon withdrawal progress will commence once again over the upcoming week as the conditions look favourable for the withdrawal of South West Monsoon from most parts of Rajasthan, Punjab, Haryana, Delhi NCR and some parts of Uttar Pradesh and Western Himalayas by 1 October.

The active phase of monsoon is slowly withdrawing from most parts of Central India.

Dry northwest winds from north India will influence the weather in central India in the upcoming week with monsoon expected to exit more parts of Gujarat and some parts of West Madhya Pradesh by 1 October as weather conditions are likely to be largely dry.

In October, thunderstorms which usually occur in Pune and the interiors of Maharashtra during the phase of monsoon retreat will begin in the upcoming week, overall typical monsoonal heavy rain events will reduce in both Maharashtra and Chhattisgarh.

The upcoming week is going to be a phase of inactive Bay of Bengal means the sea will not host any low-pressure area for at least next seven days. Under such scenario widespread rains will remain missing from the country’s North East.

Due to the prevalence of a trough at lower levels convective rains will remain active.

Parts of Kolkata to experience isolated rains and slightly humid weather across the festival of Durga Puja.

The weather conditions in South India have been fairly clear and dry for the last two weeks except the coastal parts of Karnataka and Goa where rains have occurred in patches.

Over the upcoming week, rains are expected to make a slight comeback in the southern peninsula as monsoon starts retreating from the northern parts of the country.

The east west trough will trigger convective clouds in parts of Tamil Nadu, Kerala, Karnataka, scattered moderate rains will occur in the region during 28th September till 1st October.

Rains are expected to pick up over Andhra Pradesh and Telangana this week with fairly widespread moderate to rather heavy rains.

The upcoming week is likely to be the last week of monsoon 2022 as the terminology of India Meteorological Department states seasonal rains during June to September only, Rains from October 1 are considered in post monsoon season – the actual withdrawal status is not factored on the paperwork.

G20 Presidency Big Opportunity For India, Must Utilise It For Global Good:PM

Trending news: China will prove to be the biggest challenge in India’s G20…